FUTA Tax Rates to Increase for the 2016 Tax Year

Reductions in the credit that employers can apply to their federal unemployment tax rate (FUTA) will be effective again for 2015, according to the federal Labor Department’s Office of Unemployment Insurance. This means that employers in those states are still working to repay their loans from the federal unemployment account. In particula, these continued FUTA credit reductions will impact payroll management for California employers.

HR and payroll professionals understand that there is a mandatory FUTA rate of 0.6% on the first $7,000 of wages an employee earns each year. This is calculated on a 5.4% credit applied to an actual FUTA rate of 6% that is granted for timely payment of FUTA. Consequently, the FUTA rate almost every employer pays is 0.6%.

However, several states have borrowed funds from federal loan accounts in order to fund their state unemployment payments. California was one of these states. Because many of these states, including California, have yet to repay these loans, they have been penalized with a reduction in the 5.4% credit to their FUTA rate. This is a cost that is borne by the private employers of each state, not the state governments.

The credit reduction to FUTA is normally applied in 0.3% increments that are indexed annually. This is payable each January when Form 940 is filed until the state’s loan is repaid.

Going into the end of 2015, a number of states will have outstanding loans for five or more years. In addition to a further reduction of the FUTA credit rate, these states are subject to an increase in their actual FUTA rates for 2015 with a tax called the Benefit Cost Rate Add-on Tax (BCR).

Fortunately for California the 1.5% BCR add-on tax was waived for this year because California’s request for a waiver was granted once again.

The California Employment Development Department (EDD) recently published the October 2015 Unemployment Insurance (UI) Fund Forecast. For 2015, employers’ UI tax rates are based on the “F” contribution rate schedule, which is the highest rate schedule, plus a 15% surcharge. The surcharge is required by statute when the UI Fund reserve ratio is below a specified level. 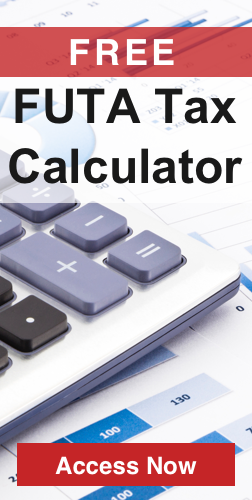 The EDD fund forecast is based on the probability that employers will continue on this schedule through 2017, and beyond, if changes are not made to the financing structure.

So, how close is the state of California to paying off its federal UI fund loan deficit?

So, as things stand today, the UI Trust Fund will only increase in deficit for the foreseeable future.

Other States That Are Subject to the FUTA Credit Reduction

The US Dept. of Labor does not officially designate a state as a “FUTA Credit Reduction state” until late November of each year as the states have until then to pay off any existing unemployment loans. It is expected that the following credit reductions will apply to the following states:

It also appears that Arizona will become a FUTA Credit Reduction state in 2016 and Rhode Island will become one in 2017.

Staying Informed on FUTA and Your Payroll Management