Although medical marijuana is still illegal in many states, we are learning from the states where it has been legal for medical use for years. How does it affect seniors? Is this good for them, or too risky? 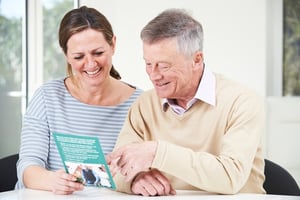 According to a 2005 National Sleep Foundation poll 39 percent of older people were likely to say they wake up a lot during the night. My mother in law, Alice, now 95 is one of them. She reported trying every kind of remedy out there: prescription sleeping pills, over the counter remedies, herbal concoctions, etc. Consistently, she said none of them worked. She could sometimes fall asleep but could not stay asleep.

Her family thought it was time she tried marijuana. My husband is a psychologist, my partner at AgingParents.com. We considered all the options. Alice takes enough pills as it is and we didn't want to risk any more medications and side effects from pharmaceuticals promoted by drug companies. Living in California where medical use of marijuana has been legal for years, it was not much trouble to get a doctor's recommendation. They met by video. He asked some good questions, discussed what products might work and recommended a specific type of weed in elixir form. Alice was all in favor of trying something new.

It took some experimenting to get the right combination of THC tetrahydrocannabinol and cannabidiol (CBD), the two most prominent chemical compounds in the cannabis plant. CBD does not get a person high but it is relaxing. Everyone's response to marijuana is different, and because it has not been regulated by government, there are various products, uneven supplies and some unpredictability in the products. After several tries, we learned how much CBD and THC Alice needed.

Once the right ratio was figured out, we asked her, "How'd you sleep last night, Mom?" "Pretty well" was the answer! We had ever heard her say that. The next morning it was the same. This continued to the present. She has a delivery service that brings her product right to the door of her seniors' apartment building. She pays cash. This works for her and we are happy with the outcome, regular sleep. It's pretty funny to hear a 95 year old telling us, "I need more pot. I'm running low".

The subject of using marijuana medicinally remains controversial. But for us, it is a remarkable medicine. We like that it has no side effects and she doesn't get high from using it. I like that no one has ever died from using medical marijuana for sleep. If your aging parents have insomnia and you are in a state where medical marijuana is legal, learn from the success of others. It just might be worth a try.